In order to transport the Airbus A380 wings from the UK to France, Airbus’s usual delivery methods could not be adopted due to the size of the new wings. Instead it was decided that the best way to transport the wings was by sea. This led to the construction of a purpose built ‘Load-out’ facility in the River Dee near to the Aerostructures Assembly and Manufacturing Centre and a transportation route to get to the Load-out facility.

Works involved the construction of a ‘NAABSA’ berth in the River Dee known as the Load-out facility. Linking this facility back to the Aerostructures Assembly and Manufacturing Centre required negotiations with a local farmer to purchase land to provide two sections of private road each approximately three quarters of a mile long. In addition, a section of the B5129 was upgraded and widened, a traffic management system had to be installed together with a wire guidance system and modifications to a Network Rail bridge over the London to Holyhead railway line. 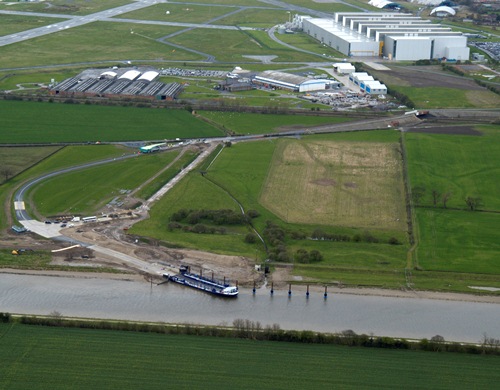